Stand Up and Scream 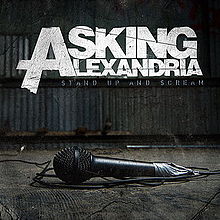 Stand Up and Scream is the debut album by English metalcore band Asking Alexandria, released on 15 September 2009 through Sumerian Records. The album has charted at number 170 on the Billboard 200, number 29 on Top Independent albums, and number 5 on Top Heatseekers. The record managed to remain at the Top Heatseekers chart at position number 36 until the end of July 2010.