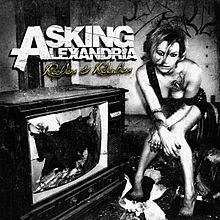 Reckless & Relentless is the second studio album by English metalcore band Asking Alexandria. It was released on 5 April 2011 through Sumerian Records. Announced on 22 December 2009, recording for the album began in June 2010 at the Foundation Recording Studios in Connersville, Indiana and ended in the fall of that year. The songs “Welcome,” “Dear Insanity,” “Reckless & Relentless,” and “To the Stage” make up the short film Through Sin + Self-Destruction, which features the band’s “party hard” lifestyle.