From Death to Destiny 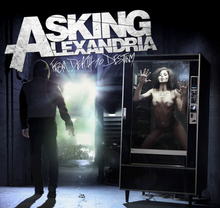 From Death to Destiny is the third studio album by English metalcore band Asking Alexandria. The band released the first single titled “Run Free” on 13 August 2012, via the Sumerian Records YouTube page. The second single titled “The Death of Me”, which had been teased several times by band members and a third track on the new album/single “Killing You”, Sumerian alike through various social media sites, was released on 28 March 2013, again via the Sumerian Records YouTube page. The live premiere took place the same day, at a performance at the Nile Theatre, in Mesa, Arizona. Sources say that the track “Run Free” will be different on From Death to Destiny than the version released on Under the Influence: A Tribute to the Legends of Hard Rock. The album was released on 6 August 2013.